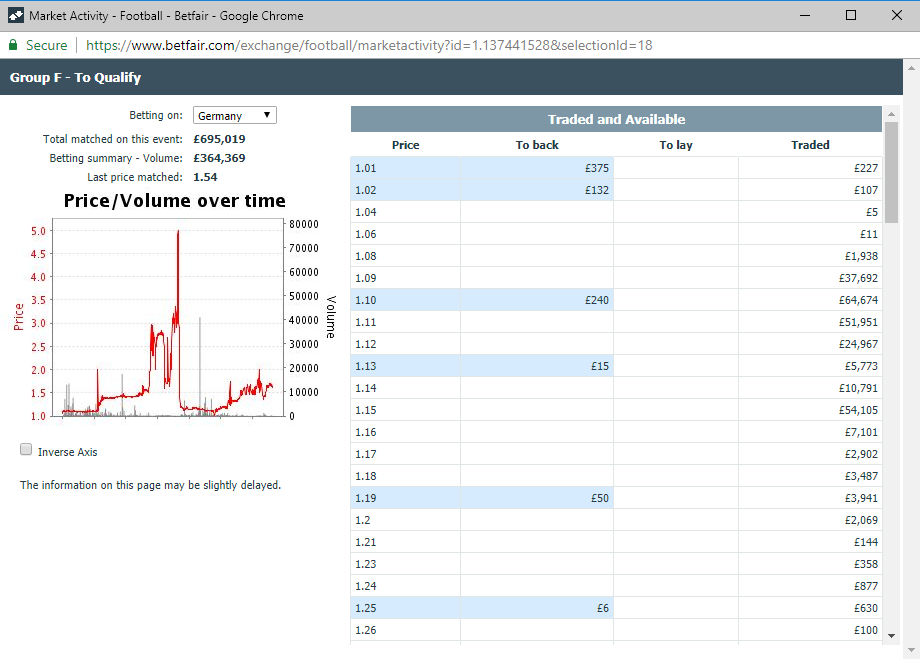 It’s not long before we are treated to the unusual spectacle of a winter World Cup.

World cups are the most prominent football markets in terms of volume and liquidity on the exchange.

It’s not uncommon for tens of millions to be matched over a match, which brings into play several betting and trading strategies we will explore over the tournament.

The total amounts matched will vary depending on what teams are playing and the stage of the tournament. The deeper we get into the tournament, the more you will see on individual matches. The market also gets a big boost when the home nations are involved.

There is a massive commercial incentive for FIFA to see ‘big’ matches between key geographic territories. This means that each tournament is set up to deliver exactly that. It’s generally a fluke if a minor team gets to the later stages without meeting significant opposition.

Therefore, betting on outsiders to trade out later in the tournament isn’t something I recommend if you look at this market.

This has been the case in each World Cup tournament I have traded on Betfair. But I don’t think this is your best generic strategy.

In each World Cup, at least one top-seeded country usually fails to progress from the group stages. This could be because of a slow start or bad luck.

So, one of my favoured markets is the ‘to qualify’ market.

Many teams will have never played each other that often and where geographic rivalries are present, which can add some extra incentive and spice to a match.

But essentially, at the World Cup, you are only 90 minutes away from oblivion or skirting a crisis, so the pressure on players to perform is very high. Football is a sport with few goals and, therefore, highly variable outcomes, creating a tendency to produce ‘shock’ results.

This means some value is usually gained by laying teams at very short odds to qualify. For many years I have successfully pursued this strategy at several tournaments, and it offers excellent value at low risk.

From a betting perspective, the low odds available often create some value. In 2018, Germany were 1.16 to escape the group stages and failed, but Spain was a more significant casualty at odds of 1.12 in 2014. Laying either team would have more than covered the liabilities with any bad picks you would have made.

But things get even better when trading. Spain slumped to a 5-1 defeat in their first match, and their tournament was all but over, but Germany fought hard to stay in and touched 1.01 to qualify before failing to do so.

So, trading or taking a speculative position in the ‘To qualify’ market is a good tactic, whether betting or trading.

You know what – We could win this!

There is a curious bias that I’ve seen in many world cups.

Each tournament, I can hear England supporters around the world hovering over the back button and finally pressing it, thinking, ‘You know what, we could win this’

Most teams that get off to an impressive start will see their odds shorten on future matches, so that can provide an excellent trading opportunity.

But England teams always seem to go off at odds that are a little short, whether you look at the tournament or individual match odds.

England also tend to be backed before a match starts, so getting your bet on early is advantageous, as you will most likely get much better odds.  But that can also present a trading opportunity as people get excited before each match. Allowing you to trade out for a profit before the game starts.

So, my general advice is to avoid outsiders in the tournament market, look to lay short prices in the ‘To Qualify’ market and expect lots of money to come for England, especially if they have a good match or two.

It’s going to be an intriguing World Cup.