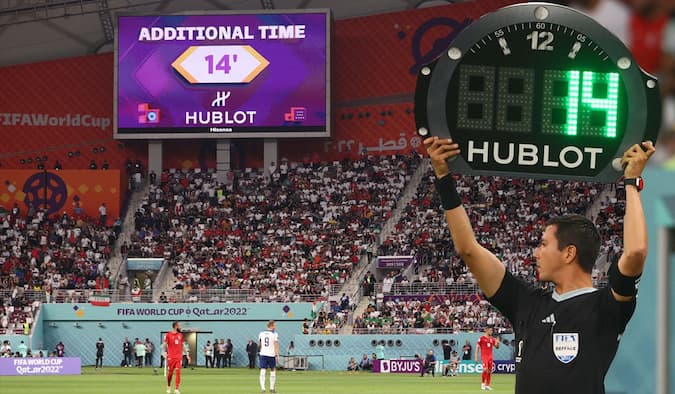 The World Cup is going as expected, and most key metrics have behaved similarly to previous tournaments.

One of the key reasons I record and monitor many statistics is not for fun; it’s to spot anomalies. Things that occur that you haven’t seen before.

That’s precisely what we have seen at this World Cup.

The first England match will be memorable for a few reasons. But, aside from the scoreline, the big thing that instantly stood out was the immense amount of time added to this game, a total of twenty-nine minutes.

When I saw the added time, I jumped to look at Betfair’s markets. To understand why let’s examine how often goals are scored in a match.

What extra, extra time means for your strategy

If we have a match that lasts 90 minutes and one that lasts three hours, which match would contain the most goals?

It doesn’t take a genius to work out that matches that last longer have more goals!

A match lasting two hours would almost certainly contain many more goals as there is much longer to score them.

When looking at a football match, you should consider some key concepts.

All betting markets work around somebody offering a price to bet at in the market, and that is often based on a model. Within that model in Football is the time left to play.

Before the start of the World Cup, most models would have been working to around 3-6 minutes of added time. Adding more than that means that any prices in the market must adjust for more time to score a goal.

Therefore, lots of extra added time will see the over/unders market adjust. Trading and cashing out when the market adjusts its pricing will net a very tidy profit for, literally, a few seconds work.

From a trading perspective, if you can lay unders just before extra time is announced, the true is same but in the opposite way for overs.

If the match is heading for a draw, then laying the draw in the match odds market will see a rapid re-rating when the amount of extra time is announced.

So far this World Cup the average time elapsed for a match is roughly 105 minutes. Compare that to an average of 95-98 minutes for the premier league game.

The extra time has also created an opportunity in the match odds market. This will also react to any extra time gifted by the officials.

Lost of time at the end of the match will also mean there are a lot of late goals.

There are many options depending on how you can exploit this, but that will entirely depend on each match and the scoreline at that point.

Thanks to the rules changes in the World Cup this year, very late goals are occurring in 50% of the matches so far. That’s a huge jump and completely unexpected.  A lot of the markets have not accurately discounted this so far.

Another way to profit from shock results

Sometimes you trade so naturally that you don’t think about things until they happen, which occurred in the first week of the World Cup.

I was already taking full advantage of the opportunities that Saudi Arabia had presented by taking the lead against Argentina when I tweeted the following: –

After no cards in the first half, six followed after they took a 2-1 lead.

The logic is quite simple. If a team has the lead in a competition such as the World Cup, then they will do literally anything to hold onto it.

In situations like this, the answer is simple, start buying cards, bookings or searching these markets for opportunities. You are almost certain to get a pay off!

There are plenty of opportunities already for this World Cup. I’m looking forward to more as we move through the competition.