You are here Academy Being lucky… 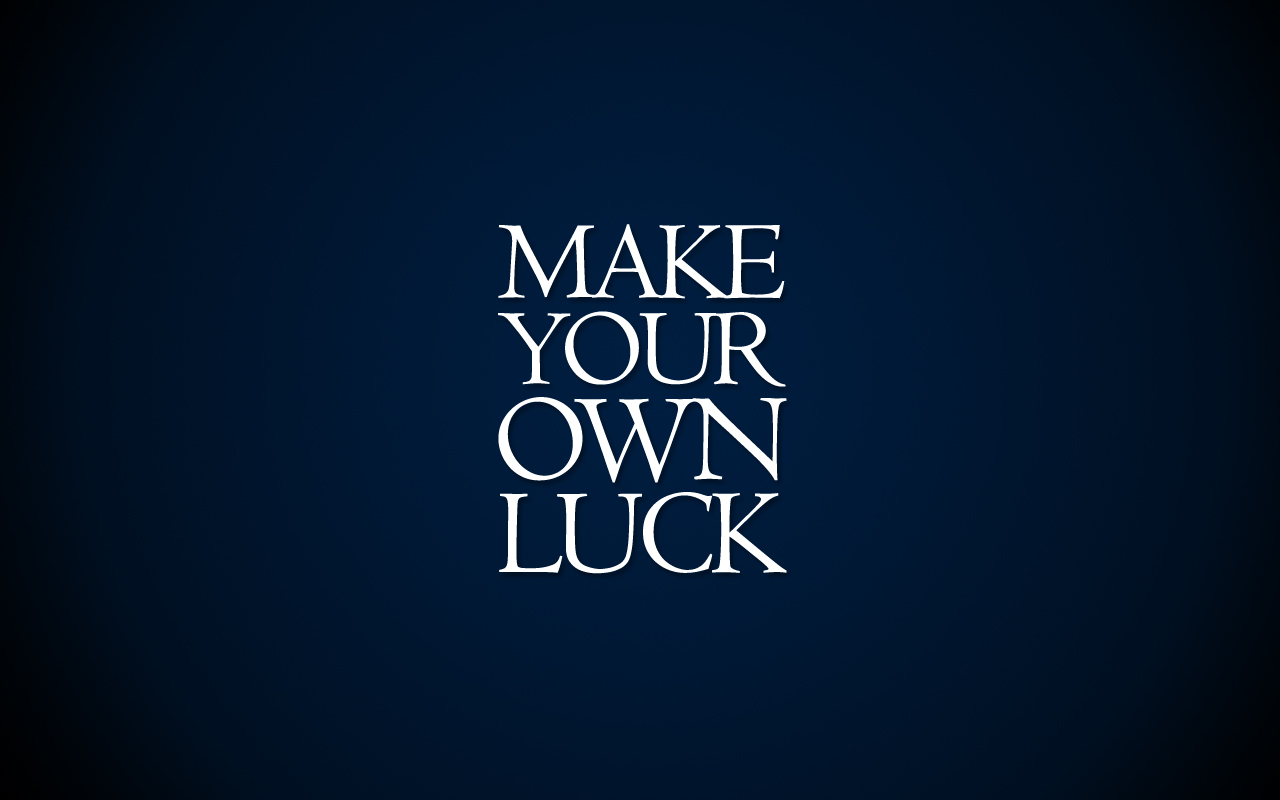 But the fact is, underlying all elements of luck are two essential characteristics, belief and perseverance.

Some people are given a good start in life, and some are not. I wasn’t given the best start in life, but certainly not the worse. I found myself, as a teenager, a bit lost and confused and slightly behind on the academic front.

One thing I did realise was that I didn’t want the life that I had. That’s where one element comes into play, you need belief to be able to set off on a journey. That first step is probably the hardest to make.

When I was young I was more or less told it was pointless trying to do anything valuable and many objections were put in my way, but I saw through them and knew that I wanted to reach something better, so that’s what I pursued. I found the strength to accept the status quo was not only below what I wanted but that I wasn’t going to accept it.

You tend to find that belief on its own is not enough. Desire, belief whatever you want to call it, wherever you want to end up, is unlikely to be a straightforward journey. So that’s where the second factor comes in. You need to persevere, often in the face of significant adversity and barriers.

I think it’s honest to say that life is generally not fair.

My peers and mentors have often reminded me of that fact, and I firmly believe that coming to terms with that fact is part of how you deal with life. When life deals you a bad hand, you may have been entirely correct, but it still gave you a duff deal. Knowing that helps you deal with it. Sometimes it works the other way, but it’s human nature to emphasise the bad moments.

Life will throw all sorts of brickbats, curveballs and issues at you. But it’s not that that will define you as a person. It’s how you deal with it that will define you. Things are not fair, and injustice should energise you, don’t dwell too much on the disappointments.

One of the things that surprised me, was that after years of hard work when you finally get your breakthrough; you expect the world to change. It doesn’t. Life carries on as usual, and there isn’t any recognition that you have ‘made it’.

This tells you that your objective at the outset must be clear and achievable and take this into account. I do projects now for achievement and not for recognition, and I get a huge amount of satisfaction from that.

It’s what gets me up each morning, sometimes at 4am!

The second surprise for me was that you can reach a point where you are very confident about something because you have explored it thoroughly, explained it beautifully and actually did it. But people will still choose to try and proffer an opinion that opposes it or what you did.

You learn that people will push their opinion on you simply to make themselves feel better.

It’s clear to understand that 1+1 = 2 – But for some people if that means confirmation that you are right, they will do everything to prove that it equals 17.

Never let people sway you from your path. People tend to speak with words that satisfy their own position. Regardless of whether that is the truth, they do it to fit into their worldview. Don’t let them sway you.

You quickly learn that even if you are entirely sure of something and know you are right through carefully applying your principles, it may be out of favour with others. Social conformity will ensure that your view does not shine through. Don’t suffer fools gladly; you will not stand a chance of overturning their views, no matter how right you are.

If your view is correct, it will eventually shine through, and people will catch up with your opinion and wonder how on earth you had such foresight. But you were right all along, it’s just that nobody realised! Don’t waste your time trying to argue with people when you know you are right, they will work it out eventually, but you will get no apology. They will just slow you down.

That’s the essence of perseverance. Sticking to your guns for valid reasons and seeing things through to their successful conclusion. People will tell you it’s not right, not possible, even if you know it is. So I never fear going against the grain anymore, never.

People say things for their own reasons, even if they are entirely false. Ignore them; see through it. Don’t let them dent your confidence.

During my journey, I’ve leant on people much older than me to give me a path of what happens next and the benefit of their wisdom. I’ve also noticed that you do need an injection of youth. People coming up behind you do not carry the same prejudices as people who have gone before, and they always carry more energy.

Change and being challenged is good; change sweeps away the old and brings in the new. You need to change to move forward; embrace it.

I conclude that another element that will help your new journey is surrounding yourself with good people.

Good can mean anything; it doesn’t mean wealth, and it doesn’t mean success. But having a mix of different types of people will allow you to weigh up all options available to you and give you a good view of any decision you must make.

Realise nobody can be 100%  right, but alternative views will provoke some thoughtfulness in yourself. Accept their thoughts and yours with appropriate humility. If somebody forcefully puts across a view, dismiss it.

They are not listening to your question.

You can see I’ve talked very little here about luck. That is because I’m not a believer in outright luck.

People often feel that it’s down to skill if something good happens. If something terrible happens is because you got stitched up somehow.

The truth is both happen in equal proportion. Don’t praise yourself too much when things go your way. Just try and steer a familiar path. Don’t change your mind every time something good or bad happens; just keep ploughing on to your eventual goal, which is probably in sight from your current position but maybe a bit distant at times.

If you keep walking forward, even on a meandering path, you will eventually reach your goal.

So when people say to me, “Hey Peter you’ve been very lucky”. I just remind them that luck is where opportunity meets ability.

Not only that, you must have the ability to take the opportunity when it is presented to you. Sometimes that takes some guts, and sometimes the opportunity doesn’t turn out to be what it is, but taking it and learning from it is the most critical step to continuing your journey.

And last but not least. I’m not just talking about trading here; it’s in everything you do.

As they say in Latin, Carpe Diem.