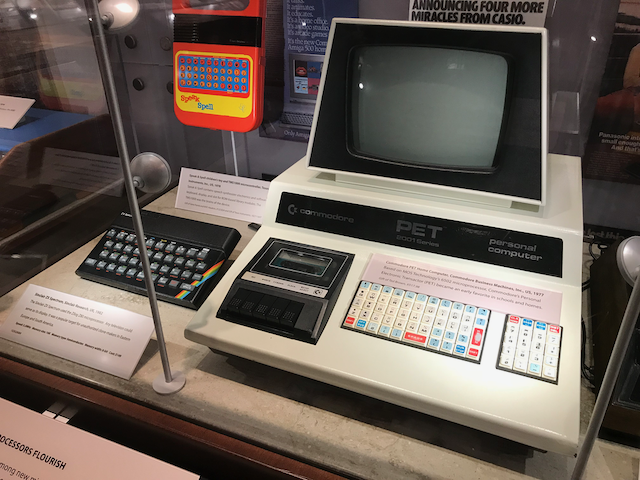 It’s the time of year when people recieved their exam results. Parenthood is one hell of a journey and moments like these are markers on your journey through life. You should enjoy them, good or bad. As you have no idea where they will lead.

Here is my story of bad exam results and where it led me!

Prior to yours truly, none of my family ed much interest academically. So it was a surprise to my Dad when I told him that I wanted to get a computer. This was in the days when home computing was not a “thing”.

It was more surprising as Sport was the thing that I was good at and that I wanted to pursue. I showed a real competitive spirit and passion and therefore did well to any sport I turned my hand to. I wasn’t but put in 110%. I didn’t really care much for the academic side of things.

That all change one day when a friend of mine who lived near my school, got a Commodore PET. This was something completely new, that I’d never seen before. I’ll never forget putting my name on a screen, making it loop and seeing a screen fill up with my name and various other things.

Trying to convince my dad that a home computer would be a good investment when he didn’t have two pennies to rub together was a little bit of a tough task. So I had to beg, borrow and steal and eventually was able to afford one of my own. I took to it, for some reason, like a duck to water. Though my Dad got concerned at how much time I was spending ‘playing’ computer games. I wasn’t, I was writing them!

My first attempt at sports modelling

One of the very first things that I did was cataloguing football matches. I’ve no idea why I did this, probably because of my interest in sport and in football at that particular moment in time. But I collected thousands of football matches in an attempt to understand them a bit better and I started to model football matches.

I’ll never forget the sense of power that I felt by having all of this data available and being able to interrogate it and I found it absolutely fascinating.  However, it was a slightly lonely existence. So I eventually found a friend who lived about four miles away who also shared the same interests.

We got together and our ability progressed dramatically as we learnt to write assembly language code and started really pushing the boundaries of what was possible on those primitive early computers. Suddenly this was the thing that I wanted to do!

There were few facilities at the school I was attending though, they didn’t even have a proper teacher. I would have to send punched paper cards to the local Polytechnic and they would accept my very simple instructions. About a week later back in the post I would receive the output of that particular bit of code. I wasn’t allowed to submit any Z80 or 6502 code as there was nobody to mark it!

That was my I.T. education when I was at school. But regardless of that, I did actually get an O level at ‘computer studies’ as it was then called. That would allow me to progress upwards into the next stage, which would of course be an A level at college.

A much bigger hurdle

But, to my shock, when I went to college they declined to allow me to do an A level, because my Maths wasn’t considered good enough. This was a bit bizarre because I was writing assembly language code and doing all sorts of weird and wonderful and clever things, without having to achieve a higher level of maths. It was actually computing that taught and allowed me to improve my maths capability rather than the other way around. My desire to problem solve forced me back to basics to relearn all those things.

In hindsight, I should have paid more attention when I first had the chance. But my ability had now leapt forward, but because my path was unconventional, my passage was blocked.

I did go to college, but to be honest with you, my time at college wasn’t a fun one. This was simply because I couldn’t do the thing that I had a real passion for. I really did resent the fact that despite pushing the very boundaries of what was possible on these early computing devices, I wasn’t considered good enough! I almost went off the rails over this, almost.

For my friend, who would code with me, this wasn’t a problem. He had much more support, was much brighter than me and it was very simple for him to be able to pursue that career path. He ended up going for a career in the city and did very well working in financial markets. We’ve remained good friends since those early days stuck in his bedroom tapping away till the early hours.

I offered him the chance to work on Bet Angel, but his golden handcuffs prevented him from doing so. Such is life!

I decided not to go to university, though my Dad often reminded me he wouldn’t fund it anyway. So it’s not as though it was really an option.

As soon as I left college I got a short term job, before landing a role with a software distributor. Here I fulfilled desire and started a software house and a direct to consumer mail order division. When I settled into my role, in order to stick up two fingers to the establishment, I actually went back to do my A-level in computer science via an adult education course. I passed without hardly lifting a finger and without attending many classes.

So, despite the fact that I wasn’t “qualified” to be able to do my chosen role, it was only a matter of months after stepping out from an academic path that I actually managed to get into that particular role anyhow. It was an important life lesson.

Things went onwards and upwards from there. But to cut a long story short my career blossomed for a number of years. Curiously though, not as a coder, because I had acquired other skill sets by that time I ended up more on the commercial side of the business, but my skill set could span a broad sweep of the industry and that’s probably why I did well.

had many happy years progressing up the career ladder into more and more senior roles and across a range of different companies.

Eventually, I was at my highest earning job ever when I packed it all in. Now with three children and a wife, I decided to become a professional Betfair trader and complete the loop and fulfil my long-term desire to do something original that nobody had done before.

The first thing I did was revisit all my football stats from all those years before and start pricing up markets. The rest, as they say, is history.

It turns out that this would be the last major decision I would make, as everything is a choice now.

What I learnt about exam results

Given my life so far, I feel that if you don’t get dealt the cards you want, or don’t get academic results that you require, or your path is blocked. It doesn’t necessarily mean that you can’t progress. Regardless of whether you have the qualifications or not, the path is often ambiguous.

Those bits of paper just show that you should be able to do something, not that you can. The reverse is also true. A lack of paper doesn’t mean you can’t do something.

I actually think a ‘good’ education can often be counterproductive. It can give you a false sense of superiority, meaning you miss obvious things and dismiss many things that could have helped you achieve something. Specialising also doesn’t teach you to be creative or be able to think through problems. So if you have a logical discipline, it’s counterproductive to what is a very illogical world!

To get on in life, you shouldn’t be at either end of that spectrum, you need to have a mixture of the two.

My message to you

My main message to you is to make sure that you don’t let anybody block your way and that you should you use your time to pursue your passion regardless of what obstacles are put in front of you. The sense of satisfaction you will when you win out far exceeds a bit of paper.

A bit of paper will help of course, but most of the really interesting people you will meet will have some of the most unconventional routes

In life, it’s almost inevitable that you will get problems, people will selfishly try and halt you and unexpected things will happen. But I learnt, quite slowly initially, that if you have a positive mindset, pursue your passion and show a bit of belligerence, you will eventually reach the place you desire.

I had all these dreams of what I wanted to achieve in my life. I never dreamt of half the things I have actually managed to achieve and it all hinged around not looking at the negative in things.

So whatever you choose to do, get started on that road today!

This entry was posted on Thursday, August 12th, 2021 at 9:37 am and is filed under Blog. You can follow any responses to this entry through the RSS 2.0 feed. You can skip to the end and leave a response. Pinging is currently not allowed.