Betfair charts are broken – Here is the solution! 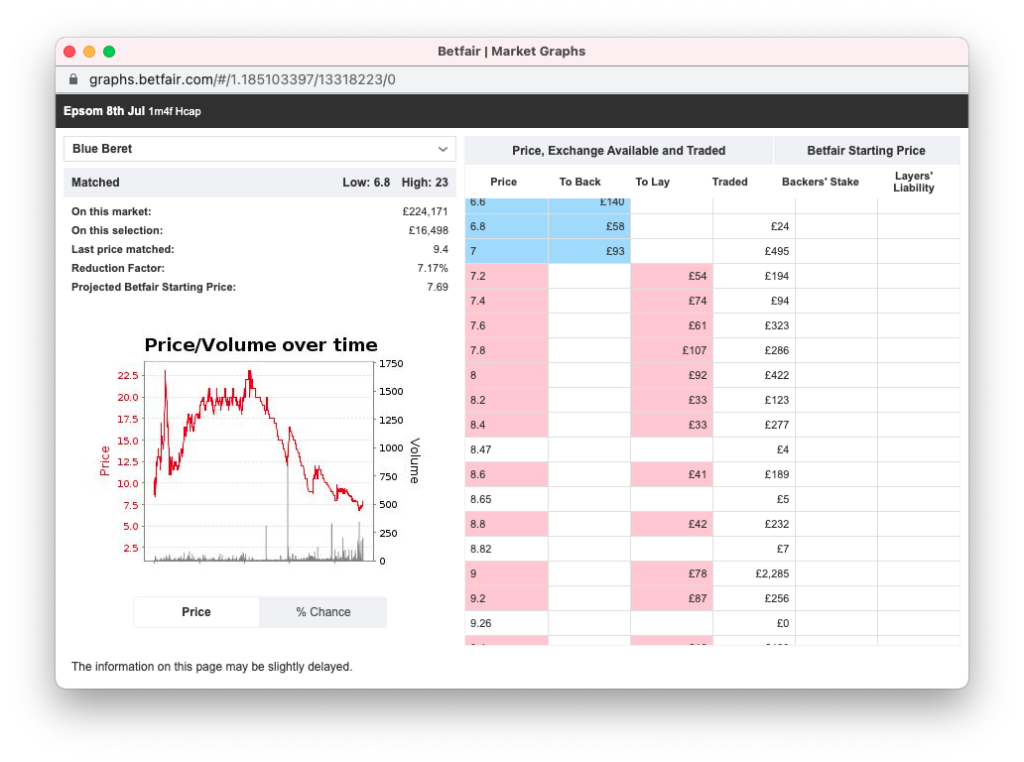 If you are Betfair trading, then it’s important to have a look at the Betfair charts. While some sports don’t suit charting, they are especially useful if you are trading pre-off horse racing markets.

However, there is a problem with Betfair charts.

The big issue is that they cannot correctly plot an accurate price history. It’s been a problem right from the day the Betfair betting exchange came into being and even with updates and changes it seems the charts have become more broken!

This blog post is going to explore why this is the case and I’ll provide a solution to these broken charts.

Why can Betfair charts be unrepresentative?

To begin, we need to look at how the Betfair charts record their data.

Firstly it is important to note that a Betfair chart is actually generated over many hours. So what you’re actually seeing is deeply compressed information.

If something from the market open starts to get shorter and shorter over a very long period of time, a normal graph would show a nice gentle slope as money comes for that particular runner.

However, when you look at a Betfair chart, the moves are a lot more exaggerated. Hours of movement appears on the left quarter of the chart and the right half is just minutes.

A couple of years ago Betfair tried to fix this, however, another problem occurred which completely broke the charts! The charts sometimes decided they would display the wrong information and in some cases, the charts even decided to go backwards.

It seems the most common issue was that when a large bet appeared, these new charts showed prices that would erratically jump from one price to another resulting in the time scale along the bottom being completely wrong.

It’s no surprise that all these strange things have resulted in nobody being able to trust them. So be careful if you’re using the standard Betfair charts only because they are broken. Betfair indicated that they are going to fix it, but I’m not completely sure when that’s going to happen, if or how.

So my advice to you…

Use advanced charts because they’re just so much better!

You can delve into so much more detail, creating a customised chart for your style of trading which can give you a unique view of the market.

Bet Angel advanced charting: the smart way to use charts

One of the first things we ever did in Bet Angel was to introduce our own chanting and it is something we continue to upgrade and enhance. Advanced charting allows you to overcome all these issues and significantly improve your trading by display tons of customisable information right in front of you.

The advanced charts give you a true plot of all of the price activity and you can scroll forwards, backwards and zoom and pan. This makes it possible to be able to see everything that’s going on with the market in the correct time frames.

Even better than that, on version 1.55 or higher, you can create and plot your own data on a chart using automation to store calculated data. This gives you the ultimate control over other charting options! It seems like a no brainer to pick the detailed and advanced charts over the basic, broken Betfair charts when trading.

Charting is such an important tool when trading, especially pre-off horse racing. I would recommend that you become familiar with the workings of advanced charting and remember not to rely solely upon Betfair’s charts.

But also, use them to create your own, unique view of the market. Something that only you are familiar with. Doing this will help you get an edge in the market.

If you want to learn about advanced charting in more depth, check out this video.

This entry was posted on Saturday, August 14th, 2021 at 5:59 pm and is filed under Blog. You can follow any responses to this entry through the RSS 2.0 feed. You can skip to the end and leave a response. Pinging is currently not allowed.