Alice in Wonderland and Wimbledon 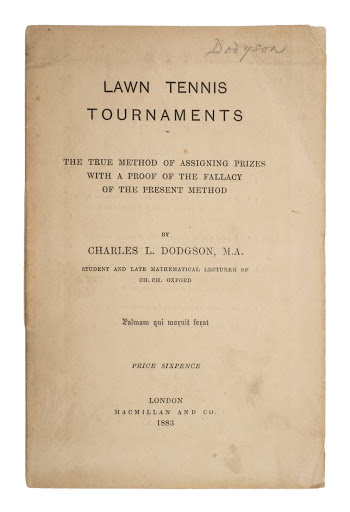 Here a curious story I learnt when research Tennis. It starts way back when Tennis was ‘real tennis’ and not ‘lawn’ tennis. Now Tennis comes in many forms, but its origins have long since be lost in the mists of history.

Wimbledon’s official name is ‘The All England Lawn Tennis Championships’ hence the reason for this explanatory blog post. But like most things, that original name is somewhat in the background now. But let’s explore what it means and why Alice in Wonderland has a role to play in Tennis.

As we know it today, Tennis came from a root called ‘lawn tennis’ to differentiate it from the older indoor version, “real” or royal tennis.

When the All England Croquet Club set a field aside for the new game and held a championship in 1877 — the first Wimbledon Championship — they combined the new and old rules and modern Tennis was born. Part of that change was a reversion to the “real” or medieval tennis scoring system: 15, 30, 40. Prior to that Tennis was easier to understand just used a basic incremental points system.

The rules for scoring have remained almost entirely static ever since, despite some attempts to simplify it. A major change was the introduction of tiebreaks in the 1970s.

As you are probably aware, most major Tennis tournaments are seeded. This means that the top-seeded players are much more likely to meet in the latter stages of the tournament. This is helpful from a number of aspects. A top player who has trained hard doesn’t really want to go out to the world number one in the first round.

But from a sponsorship and commercial perspective, a tournament that builds to a clash of the titans in the final few rounds, is exactly where you want to be. But the fairness of a tournament is where Alice in Wonderland comes to meet Tennis.

We have to thank a man called Charles Dodgson, more commonly known by his pen name, Lewis Carroll. Author of many books including Alice in Wonderland.

Curiously, the man who created this famous book was also interested in lawn tennis.  He wanted to make them fairer, more logical, more mathematically perfect.  Carroll wrote about the rules of lawn tennis tournaments after talking to somebody who was upset after he lost in the first round and then saw a player much weaker than himself make his way into the finals.  Of course, they didn’t have seeding back then.  Draws were composed randomly, so the best and second-best players could very easily meet in the first round.

Carroll offered his solution in an essay named, “Lawn Tennis Tournaments, The True Method of Assigning Prizes with a Proof of the Fallacy of the Present Method.”

While novel his system wasn’t as simple as the method in use today. He created a complex tournament structure in which players could not be eliminated in the first round.  Losers kept playing until they had three superiors, three people who had beaten them or beaten someone who had beaten them.

I think I prefer the current structure. While not mathematically perfect, it’s a bit easier to understand but Carroll did come up with a system that would decide a true champion.

If you are interested you can read the article here, buried deep in the collected works of Lewis Carroll.

This entry was posted on Friday, July 9th, 2021 at 6:56 pm and is filed under Blog. You can follow any responses to this entry through the RSS 2.0 feed. You can skip to the end and leave a response. Pinging is currently not allowed.